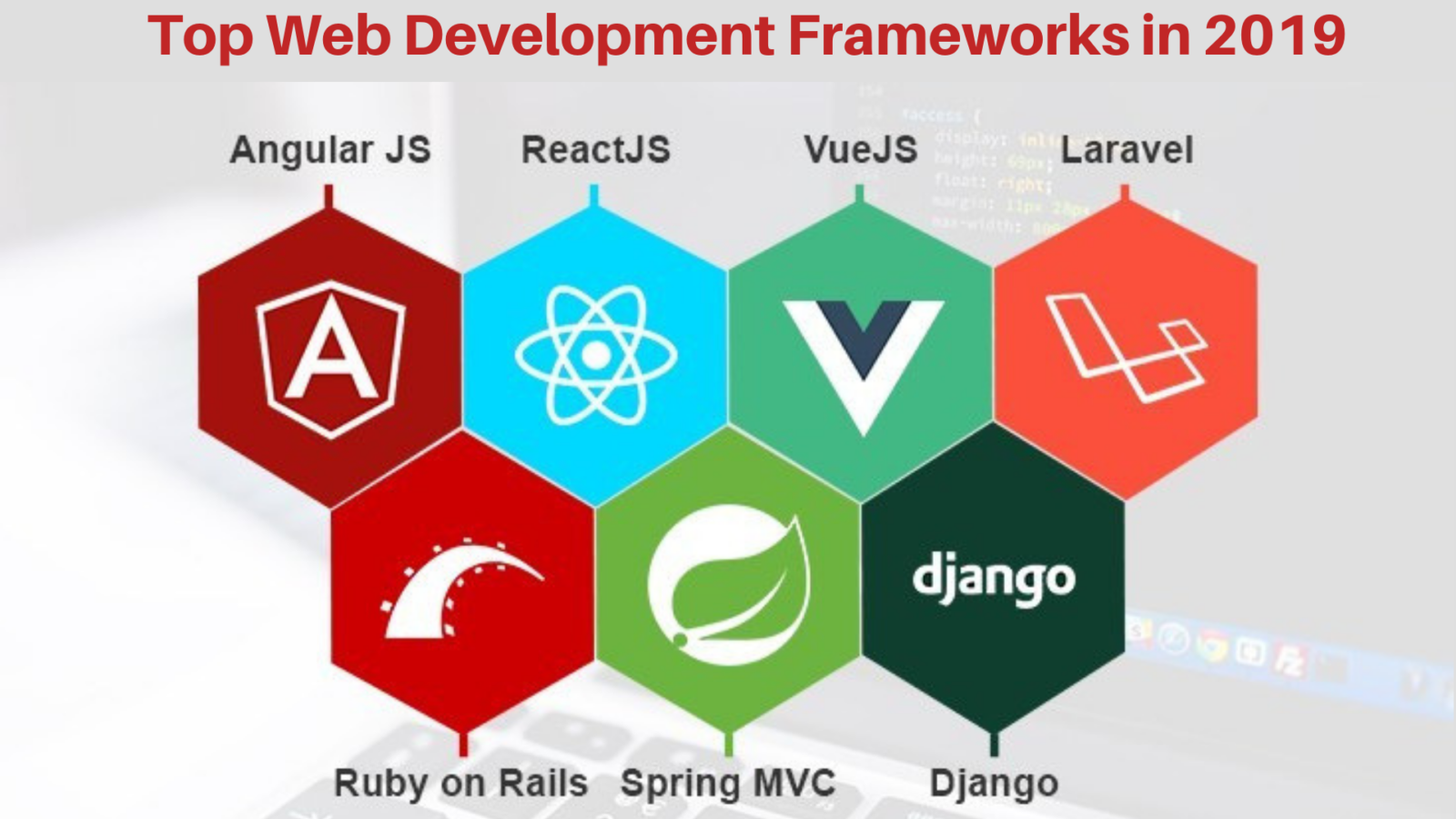 Frameworks have become an important part of web development, as the standard of web applications is always rising, so does the difficulty of the technology needed. It’s completely unreasonable to reinvent the wheel for such complex technology- That’s why using a framework endorsed by thousands of developers around the world is a very sensible approach for interactive web applications. A web app has a frontend (client-side) and a backend (server-side) so we will look at both the best frontend framework as well as the backend framework. Here goes the list of the top web development framework in 2019.

Angular is an open-source platform for building UI (User interface) it’s important for large enterprise-scale projects and holds the best positions among Front- end framework. It’s a rich system ready to assemble the total customer side application and there’s such a great amount to do. Angular utilized JavaScript, yet later discharges received typescript, which is a superset of JavaScript. Angular main cons are its size compared to another framework, and the fact it’s not SEO (Search Engine Optimization) friendly by nature, though it can be SEO optimized. Angular was developed by Google, and it’s used by PayPal, Microsoft, and Google.

React is not a framework, it’s a frontend library, but developers consider it a framework and it’s usually compared in that context. React was the first to adopt the component-based architecture that Vue and Angular and other many frameworks started to adopt later on. React’s virtual dom makes the dom-manipulation much faster especially thanks to its JSX syntax. React could be used by the client or server-side. It was developed and maintained by Instagram and Facebook.

Vue continues to get more attention every month from the developer’s community. Vue.js is started as an individual project and speedily grew into becoming one of the most trending JS frameworks out there. There are many cool things about Vue. First, it’s a cumulative framework, which means that if you existing projects, you can adopt Vue for one portion of the project and would work just fine. Some people are wary of using Vue since it’s supported by a large company like Facebook or Google, but that’s speed changing as large names are starting to invest in Vue.

Ember was named the top JavaScript framework back in 2015. Today, the Ember community is huge and it’s ever-expanding, with new features added regularly. Ember possesses the two-way data binding that angular boasts and it comes with a lot of features that you can use out of the box. It’s being used by Netflix, Microsoft, Heroku, and Google. Ember revolves around the developer’s productivity. And adopting some JS practices in its core design.

Express is quickly becoming one of the trending frameworks nowadays. Simplicity and speed are the main principles of Express.js which is a Node .JS API and web app development framework. One of the lots of open-source frameworks, it includes a great number of out-of-the-box tools, and solutions can be made with just a couple of code lines.

Express is easy to use, especially if you already have experience with Node.Js. It is used by Uber, Accenture, and IBM and many other web development companies. And it’s also being used in other frameworks such as Loopback Sails, Kraken.

Django is one stunning web framework that assists in creating a classy web application. It is a model-view template framework that uses python for web development. It used by some of the big names such as Instagram, YouTube, Google. Django boasts its batteries-included feature, which is a bunch of features such as messaging and authentication that Django comes bundled with. Security in Django is a serious topic and Django either provides tools for developers to build a secure website the security features in the features in the framework itself like preventing program execution in the template layer.

Rails are a Model-view-controller framework that uses Ruby that is loved by many developers. Rails are used by GitHub, Airbnb, Hulu. Rails help beginner’s friendly framework.it helps beginners get started with web development quite easily. This is one of the best familiar web frameworks formulated utilizing the Ruby programming language and performed on Linux. It has built-in security dependent function and applies a kit of add-ons before the release of the web application.

Laravel is a Model-View-Controller framework that uses PHP, which is one of the best languages of the web. It’s relatively young compared to many other frameworks on this list. It is the most widely used youngest PHP framework for web application development introduced in 2011. Laravel complete backend toolkit for e-commerce site developers. Laravel is the most advanced and alternative to the CodeIgniter framework.

Some of the important features of Laravel are listed below:

Spring is a Model- View-controller framework that uses Java, the all-time famous language. There are many types of modules like testing, authentication, transaction management, remote access framework, etc. available on sister projects and spring can let you take your business to the next stage.

It’s used by a website like Bill Guard, Wix, and Ticketmaster. The fact that it uses Java, a strongly typed language, is a serious pro web developer.

I hope you find our list of the most popular and advanced web frameworks useful. Web frameworks have become a very important element of web development, as the measure of the web application is constantly improving, so does the technology.